Newcastle is the defining jewel of the North East.

A city guarded by the majestic and iconic Angel of The North, signifying the city’s flight towards the information age. A city steeped in history. A city with its eyes wide open to the future with anticipation stirring in its streets. 57% of developers said the North-East is the UK’s most opportunity-rich region

Wandering through the streets of Newcastle, it is easy to see why Lonely Planet described the city as ‘the hipster capital of the North East’ and why it was voted ‘favourite UK city’ by The Guardian and Observer Travel Awards.

Newcastle is a perfect blend of past and present with its sights firmly set on the future creating the ideal city-centre experience and lifestyle that students and young professionals crave. People’s passion for the region can be personified by the droves of loyal supporters who turn out each week to watch football at St James’ Park. It’s easy to see why the university student population has grown to over 100,000 students with an ever-growing overseas intake for five regional universities including two of which are recognised globally.

With the growth of the student population, comes the increase in demand for student accommodation. 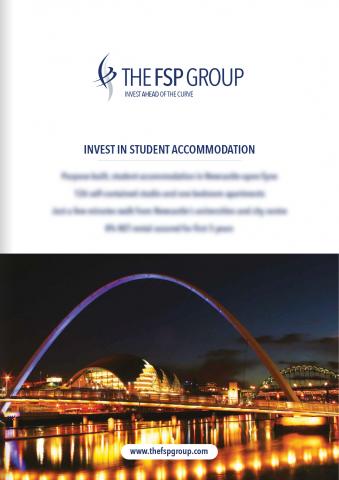 Invest in high quality student accommodation in Newcastle upon Tyne

In recent years the student property market has ballooned with investor funds increasing exponentially. Student accommodation is no longer a niche venture; it is one of the most attractive and lucrative investment asset classes available today.