All, at one time or another, have owned TVRs.

Unless you're a total petrol-head, it would come as little surprise if you’d never heard the name TVR before. For the uninitiated, TVR is a British specialist sports-car maker that although started life way back in the early 50s, didn’t really make any kind of notable mark until the 90s, and then it disappeared again, until 2013.

During the 90s, a range of testosterone fueled speedsters were launched with exotic names like Cerbera, Chimaera, Sagaris and Tuscan. It was a Tuscan TVR Mk 1 that featured in the Hollywood blockbuster Swordfish and was said to have inspired Travolta to buy one for himself.

At its peak, TVR was the third-largest specialised sports car manufacturer in the world despite the fact that the cars were known for their ability to break down as much as their sweeping curves, muscular frames, and quirky names. As one car enthusiast observed, “Whenever I see TVRs at meets, owners always seem to have a toolkit and spare coolant or oil in the car - and are rather handy with spanners.”

Despite the glaring downsides, enthusiasts remained enthusiastic - and more than a decade later, that devotion appears undiminished. Nostalgia has steadily grown and has been sowing the seeds for a much-hoped-for comeback ever since. So, what was it about the TVR that made it so appealing?

“They were pure unadulterated driver’s cars, with a mix of raw speed, lack of safety equipment, and a reputation for being right on the edge.” As another driver put it, “They’re definitely more fun than MGs!”

TVR Boss at the time Wheeler himself said:

“Traction control is your right foot and you don’t need airbags if you don’t crash in the first place!”

Undaunted enthusiasts will be delighted to hear then that finally, after almost a decade spent laying low, the rebirth of TVR is now more than just a pipe-dream. Seven years after acquiring the lock-stock rights in 2013, the new team led by Les Edgar were able to breathe a huge sigh of relief after finally receiving news that the 200,000 sq. ft production facility in the Ebbw Vale, Wales was finally moving forward. Welcome news indeed after so many years of headaches and delays (including extensive damage by an illegal rave). Now, the planning application detailing its refurbishment has been submitted and news that the Welsh Government has taken a 3% stake in the company - and provided a £2 million loan - further bolstered belief that this looks like the real deal.

Having been plagued since its birth by numerous changes of ownership, brand re-boots, lack of investment and questionable leadership, the pedigree of the current team suggests that lessons have been learnt about the mistakes of the past, and also how to compete with the automotive behemoths of today.

Gordon Murray, Bernie Ecclestone’s chief engineer for almost two decades, is the name that most car fans will recognise, having designed the iconic McLaren F1 and the Mercedes-Benz SLR McLaren. Renowned as a brilliant automotive engineer and aerodynamicist, it is his iSteam technology and Gordon Murray Design that is leading development, with a simplified assembly concept utilising low energy processes, and low cost, light-weight, readily available materials.

The new TVR Griffith was launched at the Goodwood revival and is estimated to put out around 500 horsepower and with a six-speed manual gearbox, will top 60 mph in under 4.0 seconds. Top speed is estimated to be in excess of 200 mph. Happily, first year’s production was sold out completely with 600 customers placing deposits, generating in excess of £40M in orders.

The future of TVR is looking much brighter than it has done for quite some time, but there’s still a way to go yet and further funds are needed. To this end, the company has extended an invitation to enthusiasts and qualified investors, to get involved and become a part of the TVR revolution and rebirth. The company has established a £25m Bond series on the Irish Stock Exchange and Net proceeds will be used for working capital and tooling/facilities when production is ramped up for the super-growly new Griffith. 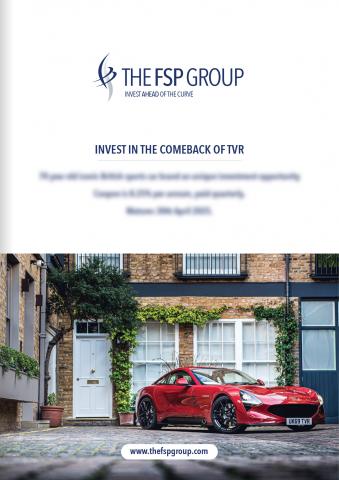